Nigerian Superstar singer, 2Face has alleged that other races in the world have a common goal of exploiting Africa.

2Face who took to twitter to accuse African Union leaders of being sellouts, further stated that different tribes were joined together by colonial leaders to bring misunderstanding. He also averred that the rest of the world always tell Africans who their enemies should be.

Read his tweets below;

Everyday I sit and wonder Why every other race is racist to black people first before any other . What is the reason behind this? I don’t think it is hate. I think it is fear of us realising ourselves.

All of them na Europe therefore European Union. Dem get the same agenda when it comes to Africa.Them gat each other back. Na only African Union dey sell out. All of dem na to exploit Africa. Don’t get it twisted.

Every race common goal na to exploit Africa. Non get genuine love or interest in our well being as a continent. It is a simple case of predator or prey. Don’t get it twisted

When I say Africa is the major feeder of the world I beg anybody to prove me wrong. I go accept if I see am

This is not an endorsement of nigerian separation or quarrel. This is for us as nigerians and Africans to understand the actual and intentional joining of us to create this misunderstanding among ourselves. From both religion and foreign language angle. Colonial arrangement.

We can’t keep deceiving ourselves in Africa. Only us can help us. The rest of the world always dictates who our enemies should be. We only believe what their press tells us even if the truth is right in front of us. Majority of our media and leadership is just copy and paste

Pls this is just my thoughts. If u think otherwise feel free to express your own thoughts. Na so we go take aligne. Nobody sabi every 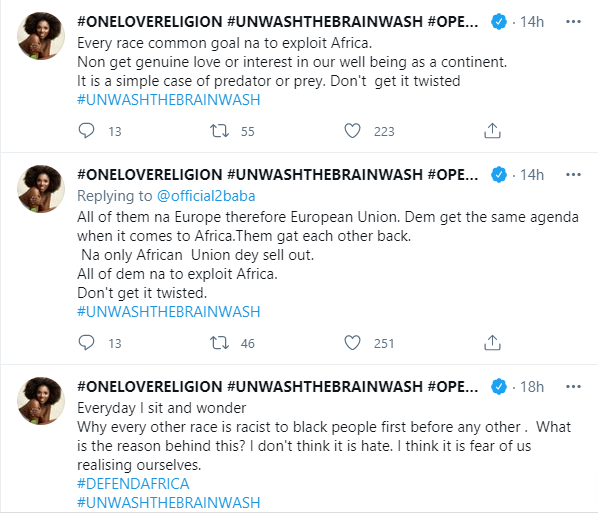