Another British-Nigerian man, Identified as Toby Olokodama, has been declared missing in London by the Metropolitan Police in Newham, United Kingdom.

In a tweet on Sunday, April 18th, the police said Olokodana disappeared from home at midnight on Saturday, April 19th.

“Toby is autistic & has learning difficulties. He is known to frequent transport hubs & travel on trains. His family & police are concerned for his welfare. If seen please call 101 ref 2068/18Apr” the police tweeted. 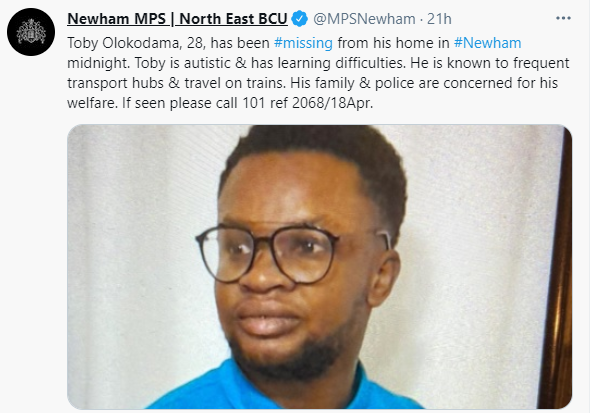 According to his bio on Facebook, Toby, 28, studied at Newham College and Cumberland Sports College On 22nd March, a 19-year-old Nigerian, Richard Okorogheye, also went missing from his home in Ladbroke Grove. His body was later found inside a lake in Epping Forest on April 5th.