A father of the victim of human right abuse, Isaac Edoh, on Thursday, November 5th, informed the Edo State Judicial Panel of Inquiry for victims of human right abuse from operatives of the defunct Special Anti-Robbery Squad, that he is yet to see his son, Baba Edoh, after he was arrested by the police in the state since 2011.

Speaking during the panel’s hearing in Benin city, Edoh who hails from Benue State, said the last time he saw his son, was inside a cell of the Edo State Police command in 2011. The Nigeria Customs Service (NCS) officer said he was yet to know whether his son is alive or dead.

He said his son was an undergraduate of English Literature, Usman Dan Fodio University, Sokoto before he was allegedly killed by the police.

“In June 2011, I received an anonymous call from the State Criminal Investigation Department of Edo State Police command that my son was arrested along Auchi road for alleged kidnapping.”he said

Edoh said when he reached the station from his base in Lagos, he saw him lying in his pool of blood apparently from physical assault and inhuman treatment melted on him by the police.

“I tried speaking with him but was disallowed by the officers on duties despite knowing the relationship between me and the suspect in their custody.

The following day, I visited the station and discovered that the name of my son was not on any of the records of the detainees in the cell.

I immediately contacted the officer-in-charge of kidnapping section who informed me that my son was not in their custody.

I was informed that he was one of the suspects paraded in a national television on June 4, 2011.

I was later told that armed robbers attacked and shot my son while the police was conducting further investigations on the matter in Auchi but none of the officers sustained injury in the attack. The only person they said died was my son. Since his death, the police have refused to release the corpse” he alleged

The chairman of the panel, Justice Ada Ehigiamusoe (rtd), admitted a photograph of the son, Compact Disk(CD) of paraded suspects, and court proceedings as exhibits.

She, however, adjourned the hearing on the case to Thursday, November 17, to get a response from the police officers. 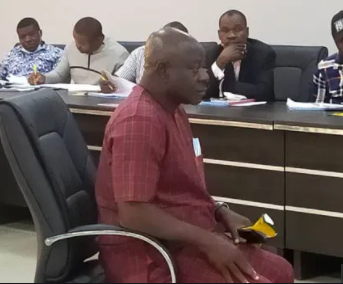