After more than a decade on television screens, Keeping Up With the Kardashians will be ending its run next year.

It was going strong for 19 seasons, but the 20th season will be its last. The Family announced the news on Instagram

With many of the reality TV show’s fans following the family on social media, the Kardashian-Jenner family chose to break the news on Instagram, Twitter and Facebook.

“It is with heavy hearts that we say goodbye,” Kim Kardashian West said.

“We’ve decided as a family to end this very special journey.

“We are beyond grateful to all of you who’ve watched us for all of these years — through the good times, the bad times, the happiness, the tears, and the many relationships and children.

Kardashian West was joined by Kris, Kendall and Kylie Jenner, Kourtney, Khloe and Rob Kardashian, and Scott Disick in signing the statement.

But the show’s home, the E! network, said in a statement it respected “the family’s decision to live their lives without our cameras”.

Audience numbers have declined in recent years to fewer than 1 million. At the height of the show’s popularity, it was reaching about 4 million.

The series, which debuted in October 2007, sparked 12 spin-off series, including Kourtney and Khloe Take Miami and Revenge Body with Khloe Kardashian.

In 2006, matriarch and “momager” Kris Jenner started shopping the idea of an unscripted show about her family, back when The Osbournes, which had a similar concept to the series, was popular.

Ryan Seacrest and his production company were interested and, after sending a camera crew to capture a Kardashian family barbecue, picked up the show.

The show’s early focus was on Kris Kardashian and her daughters, Kim, Kourtney and Khloe, their relationships and their business exploits.

The daughters’ partners, including Disick, Lamar Odom and Reggie Bush, were featured.

Kendall and Kylie’s other parent was also a key part of the show. Her transition to become Caitlyn Jenner broke new ground and putting transgender issues in the public sphere.

She went on to appear in an unofficial spin-off, I Am Cait.

The other Kardashian-Jenner sisters also made the announcement via their respective Instagram handles and so did momager, Kris Jenner. 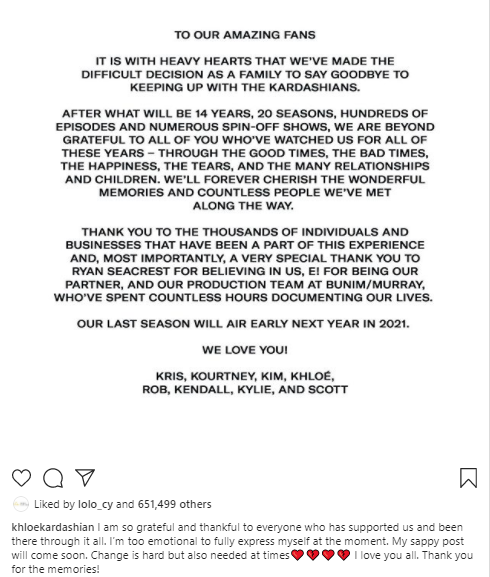