Recall that on November 5th, the CBN secured an order from Justice Ahmed Mohammed of the Federal High court in Abuja to freeze the accounts of 19 of the alleged #EndSARS promoters and a public affairs company. The apex court alleged that the accounts of the promoters were linked with terrorist activities. The court granted the request of the CBN and their accounts were frozen for 90 days.

Fourteen out of the twenty alleged #EndSARS promoters whose bank accounts have been frozen by the Central Bank of Nigeria, CBN, have filed a countersuit before the Federal High court in Abuja, for their accounts to be unfrozen.

In a 27-page motion filed through their team of lawyers led by human rights activist, Femi Falana, SAN, the #EndSARS promoters told the court that they never granted fair hearing by the court before their accounts were frozen. They accused the CBN of not only lying to the court when it painted them as suspected terrorists but also engaging in gross abuse of the judicial process.

Listing 13 grounds the court should consider and unfreeze their accounts, the Applicants, argued that

“the ex-parte order made on the 4th day of November, 2020, by this Honorable Court was made to validate an illegal act.

The Plaintiff/Respondent unlawfully froze the accounts of the Defendants/Applicants before seeking and obtaining the orders of this Honourable Court on November 4, 2020.

This Honorable Court on the 4th day of November, 2020 pursuant to an ex parte application brought by the Plaintiff/Respondent, made a mandatory order, inter alia, empowering the Plaintiff/Applicant to direct the head of Access Bank of Nigeria Plc, Fidelity Bank Plc, First Bank Plc, Guarantee Trust Bank Plc, United Bank Plc and Zenith Bank Plc to freeze forthwith all transactions on the 20 Bank Accounts of the Defendants/Applicants for a period of 90 days pending the outcome of investigation and inquiry currently being conducted by the CBN without affording the Respondents/Applicants the right of fair hearing.

The said order of the Honorable Court permitting the Plaintiff/Respondent to freeze the Applicants account for a period of 90 days (renewable for another 90 days) breached the fundamental right of the Defendants/Applicants, to fair hearing guaranteed by Section 36 of the 1999 Constitution (as amended) and Article 7 of the African Charter on Human and Peoples’ Rights (Ratification and Enforcement) Act, Laws of the Federation, 2004 in that no fair hearing was granted the applicant/respondent before the order was made.

The order permitting the Plaintiff/Respondent to freeze the Defendants/Applicants account violates Order 26 Rules 5, 10 And 11(1) and (2) Of the Federal High Court Civil Procedure Rules, 2019 which prescribes a maximum period of 14 days as the duration of an ex parte order.

The said order violated the rights of the Defendants/Applicants to own movable property.

There was no urgency warranting the grant of the order exparte.

No Motion-on-Notice was filed together with the Motion Ex Parte.

The Ex Parte order made by the Honorable Court has determined the fundamental right of the Defendants/Applicants without affording them fair hearing. “No undertaking was made as to damages.

“That on October 15, 2020, the accounts of the Defendants/Applicants were frozen by their respective banks on the orders of the Plaintiff/Respondent without notice and lawful justification.

That the Plaintiff/Respondent approached this honorable court by way of motion ex-parte to legalize the illegal freezing of the Defendants/Applicants accounts.

That an ex-parte order was made on the 4th day of November 2020, by which this Honorable Court froze the Respondents/Applicants’ accounts based on the allegation (s) bordering on terrorism.

That the Plaintiff/Respondent failed and or neglected to furnish this Honourable Court the ground for such belief.

That the Plaintiff/Respondent’s motion ex parte did not disclose any fact capable of linking the Defendants /Applicants to any terrorism activity”.

They argued that unless the order to freeze their account is vacated, they would suffer economic hardship.

“Unless the order by this Honourable Court made on the 14th of October, 2019 freezing all transaction in the Respondent/Applicant accounts is set aside or discharged in its entirety, the  respondent/Applicant’s business in Nigeria will be completely ruined”they averred

The #EndSARS promoters also stated that they were never given the opportunity to defend the terrorism allegation the CBN made against them before the ex-parte order was made.

They argued that this is contrary to the provision of Section 36 of the 1999 Constitution (as amended) and Article 7 of the African Charter on Human and Peoples’ Rights (Ratification and Enforcement) Act, Laws of the Federation, 2004. 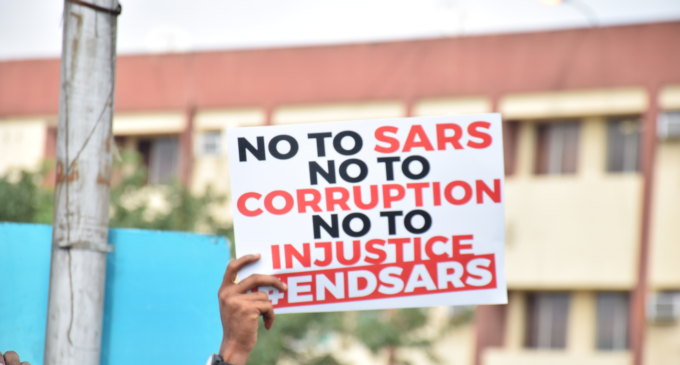