Nigerian lawyer, Dele Farotimi, has said that the Lagos state governor, Babajide Sanwo-Olu, the Lekki Concession Company LCC, the Nigerian Army, and others have no interest in uncovering the truth of what happened at the Lekki toll plaza on October 20th.

Speaking during the interview with Arise, Farotimi opined that the Lagos state government and others linked to the incident will not allow the panel of inquiry to uncover the truth behind the shooting incident.

”The Lagos state government does not dare to allow the panel that is currently sitting in Lekki to sit neither does the Nigerian government or the Nigerians Army…They might pretend they are intesrested in finding the truth, I guarantee you and I tripple .0dare them to allow panel to sit.

Their ongoing shenanigans to ensure the panel is truncated, them finding all of a sudden that people who are funding peacefulprotest are terrorists.

It is designed to ensure that the youth representatives on that panel walks away. It is an act of provocation. Nobody sits down to negotiate with a man who has a gun on the table.

I am saying here and now that the Lgaos state government, Jide Sanwo-Olu, the LCC, the Nigerian Army and everybody connected there have no interest in uncovering the truth of what happened in Lekki.

The concerted efforts are the lies, the many aristotelian dimension to the madness they are calling investigation,” Farotimi said. 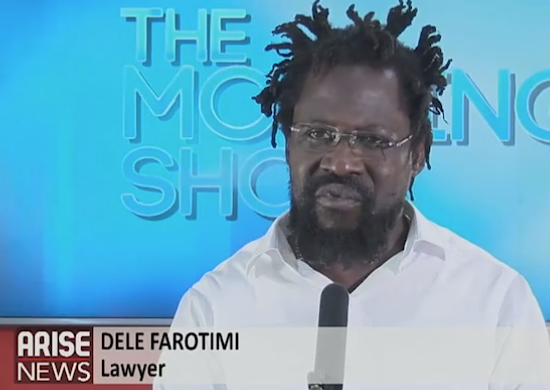