Accountant-General of the federation (AGF), Ahmed Idris has retracted his statement after President Buhari’s aide, Lauretta Onochie countered his claim of £4.2m Ibori loot being returned to the Delta state Government.

On Wednesday May 26, barely 24 hours after the Accountant-General said the funds have been returned to Delta state to avoid litigation against the federal government, Lauretta Onochie countered it by saying it is yet to be returned to the South-South state as it will be against the terms and conditions on which the funds were repatriated.

“Now, let me remind us. The attorney-general of the federation, Abubakar Mallami, the British high commissioner, Catriona Laing, and other relevant agencies held a press conference openly telling the world when the money would be returned, and the specific projects the money was approved for openly.

“When it was delayed, the attorney-general informed Nigerians of the reason for the delay. When the loot arrived, Nigerians were informed too. The conditions under which the funds were repatriated, still stand. Again, no penny was paid to the Delta state government. If we break the conditions for getting this chicken amount, how do we get the elephant amount that is still coming?

“The British high commissioner is also keeping an open eye on those projects. I know what we all heard. But we also know the facts. Pres. Muhammadu Buhari runs an open government. The attorney-general is part of the open policy. Nothing hidden. Nigerians would be the first to know if he decides to break an agreement made with Britain. I very much doubt it. He’s an Honorable man.” 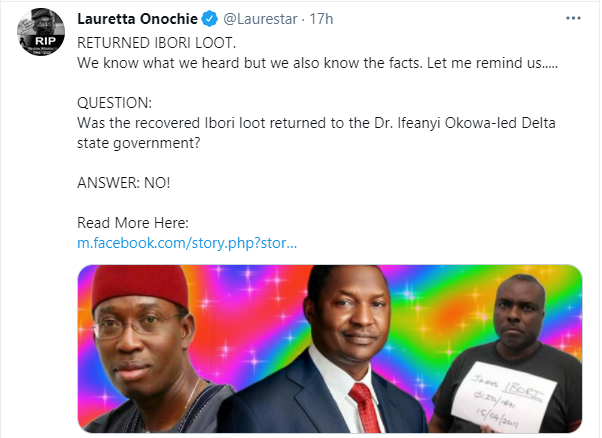