man battered his wife to death with a marble chopping board after she signed off a text to their handyman with a kiss, a court has heard.

The court heard how Leslie Winnister, 68, went to the pub for a pint and a packet of crisps after killing his wife, Suzanne Winnister, 66.

When he was arrested in his bloodstained clothes he told officers: ‘I’ve just had a terrible day.’ 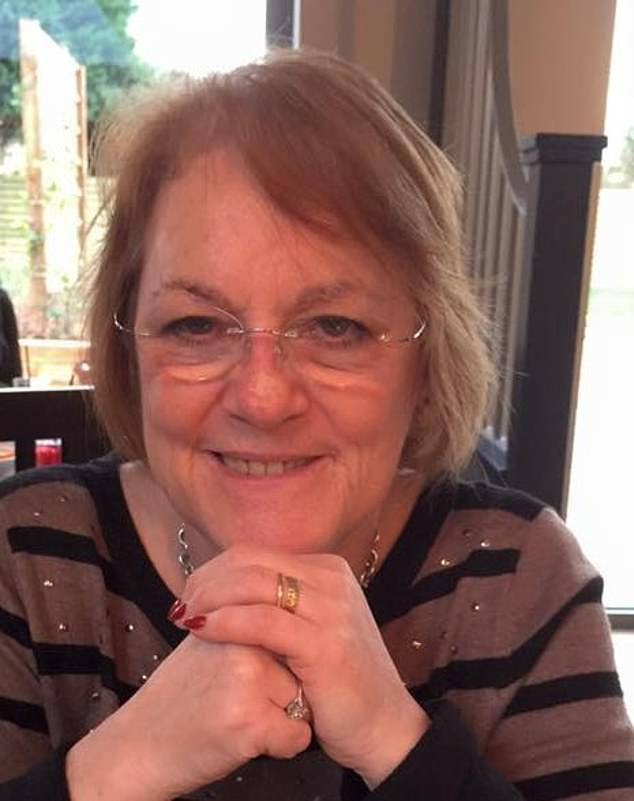 His wife was found by family members with severe head and neck injuries at the couple’s gated £1.6m house in Becketts Close, Bexley, at around 9.15pm on September 8 last year.

Winnister was discovered among the graves in a nearby churchyard after leaving the King’s Head pub in Bexley High Street.

He has now been handed an indefinite hospital order at after admitting his wife’s manslaughter by reason of diminished responsibility.  He had previously denied her murder.

Winnister served as Telecom company, BT’s treasurer for 15 years and was registered as a director of the company. 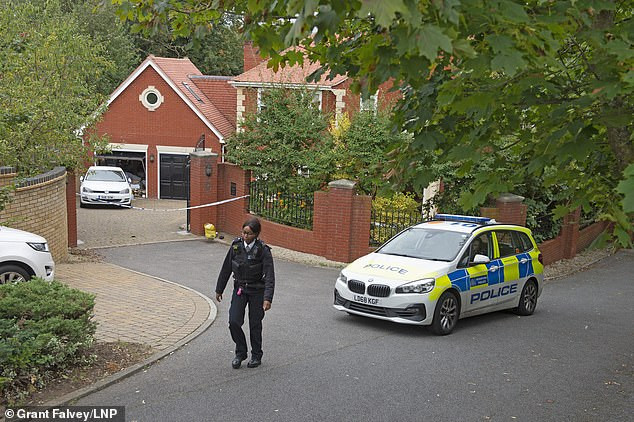 Bill Emlyn-Jones, prosecuting lawyer told the court that the couple had been married for nearly 40 years and seemed to have a happy and stable marriage until 2019 when their marriage started to deteriorate.

‘It appears there was a marked deterioration of their relationship from about 2019 onwards,’ he said.

‘It maybe this was triggered by a text message sent by Mrs Winnister to the defendant by mistake.

‘It may have been meant for a Mr Alan Mainwaring, known as Alfie, who worked for the Winnisters as a handyman.

‘It said are you coming today, followed by an x, indicating a kiss,’ said Mr Emlyn-Jones.

When Winnister questioned his wife about it, she said this is how she signed off texts to all kinds of people, but he became convinced it meant she was having an affair.

The next time the handy man visited their home in August last year, Winnister confronted him about the supposed affair and ranted about his wife trying to poison him.

He threatened the handyman with a crowbar and smashed some windows before the handy man ran away.

‘After that incident Mrs Winnister indicated to the police as well as her friends and family and she was no longer willing to have the defendant in the same house as her,’ said the prosecutor.

Winnister lodged himself into a Holiday Inn and continued to have regular meetings with his wife, always in the presence of others, several weeks after that incident .

‘They turned to be inevitably unhappy and fractious occasions, in which the angered defendant would repeat his allegations of his wife of infidelity,’ said the prosecutor.

Winnister also levelled other accusations at his wife including her interfering with his car and credit cards and poisoning him by pumping carbon monoxide into his hotel room.

As the weeks passed, Mrs Winnister became ‘upset’ at her husband’s deteriorating condition, noticing he looked unkept and was losing weight.

She reluctantly allowed him to move back into the marital home, but told friends and family she installed a lock to her bedroom door.

Two days later, after family was unable to reach Mrs Winnister on the phone, her niece Kate Cox drove to her address along with her husband Simon.

Mr Cox jumped over the fence to get into the house and found Mrs Winnister lying in a pool of blood in her kitchen.

The chopping board used to batter her to death was lying next to her body.

He had also slashed her throat with a knife and post-mortem examination held the next day gave the cause of death as severe head and neck injuries.

After his arrest, Winnister told officers in a prepared statement: ‘I believe I was drugged through my food and drink and through the air.

‘This was over the course of several months.

‘In my view, my wife and Mr Mainwaring were responsible for this.

‘As a result of the drugging I felt unwell and I was acting massively out of character.’

Mr Cox said that the memory of discovering her body remains ‘imprinted on his mind’ and is something he will have to live with for the rest of his life.

‘I am angry with Les and the devastation he has done to his family.

‘My children lost not only an auntie, they lost an uncle,’ he said.

‘I hope that Les will come to terms with the gravity if his actions on the people who knew and loved Suzanne.

‘Not matter what, she didn’t deserve what was done to her.’

Mrs Cox said that Mrs Winnister was her ‘best friend’ and her ‘rock’ and the closest family to her and her daughters.

‘Leslie’s actions have changed our lives forever, taking the life of someone who was loved so very much.

‘We have experienced the worst possible loss that I can imagine,’ she added.

Mrs Winnister’s sister Jackie Higgins spoke of the moment she had to break the news of her death to their 92-year-old mother.

‘I will never forget telling my mum her daughter has died in such circumstances, at the hands of someone loved by our family,’ she said.

‘I miss Suzanne, I miss our daily chats by phone and I am struggling to come to terms with the fact I have to sister to chat or talk on the phone and never will again.’