There was a huge scare at Atletico Madrid training on Tuesday evening, March 23rd when French striker Moussa Dembele fainted and appeared to lose consciousness during a training session.  The former Lyon striker was filmed stretching out his hamstrings before collapsing to the ground and lying motionless on the pitch.

Dembele’s team-mates quickly assisted the striker before calling for the help of Atletico’s medical staff for urgent medical attention.

Members of the medical team spent several minutes trying to resuscitate the player, while his teammate ran to the pitch-side ambulance to get a stretcher.

The 24-year-old later regained consciousness after being turned on his side and was able to leave the pitch unassisted.

Medical tests were later conducted on him and reports have stated there is no ‘serious’ concern, claiming the incident was caused by low blood pressure.

The player will continue to be monitored by the club’s medical staff and will remain under close supervision following the incident.

Dembele – who joined Atletico on a ‘loan with an option to buy’ deal from Lyon in January, has so far featured in just 87 minutes of action for Atleti. 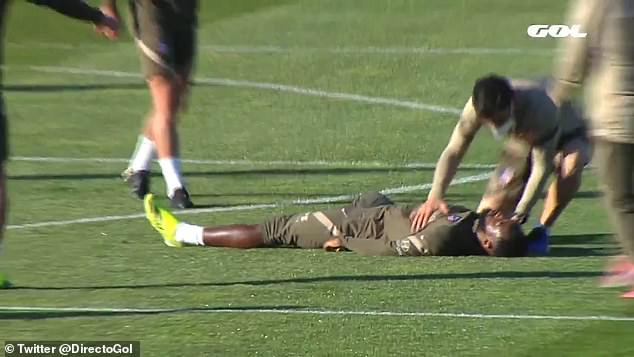