Elon Musk has said that people can now buy Tesla electric vehicles in the United states with bitcoin.

“You can now buy a Tesla with Bitcoin,” the chief executive – and self-named “Technoking of Tesla” tweeted on Wednesday, March 24th.

Musk also went on to clarify in another tweet that Tesla will be keeping the money received from customers as bitcoin, rather than coverting it to traditional currency like dollars.

“Tesla is using only internal & open source software & operates Bitcoin nodes directly. Bitcoin paid to Tesla will be retained as Bitcoin, not converted to fiat currency.” 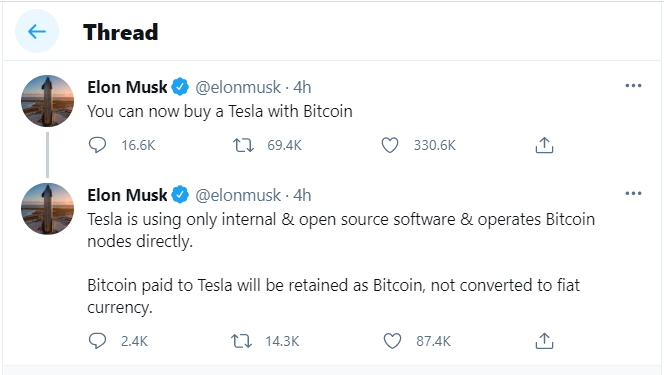 Musk also said that the option to pay with bitcoin will be available to other countries “later this year.”

This comes a month after he revealed that he had bought $1.5 billion worth of bitcoin and would soon start accepting the world’s most popular cryptocurrency as a form of payment.