Nollywood actress and entrepreneur, Chika Ike has cleared the air on alleged rumor making the rounds that she’s dating fellow actress and colleague, Regina Daniels’ husband, Ned Nwoko. The rumor started off as a viral video in which Regina Daniels’ mother  allegedly threatened the actress. Rita threatened to go spiritual if Chika Ike does not stop trying to snatch her daughter’s husband.

While many people have come after Rita saying that she should just stay off and let the man rule his empire before she go complicate issues for her daughter Regina, others wonder why the rant, after all, Regina too was number six in the line of Ned’s wives.

Reacting to the rumour Chika Ike took to her social media page to deny the rumor about dating Ned Nwoko and said that she is not ready to become any man’s 7th wife. 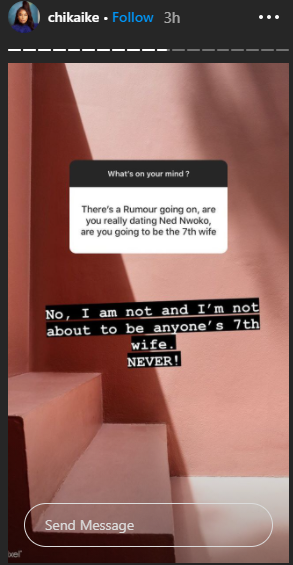